As I first open my eyes in the morning of the eclipse day, I look out of the window. The sky is mostly clear, with thin layer of clouds in some parts. The weather looks hopeful. But, as we have learned this previous week, it can change in short time. 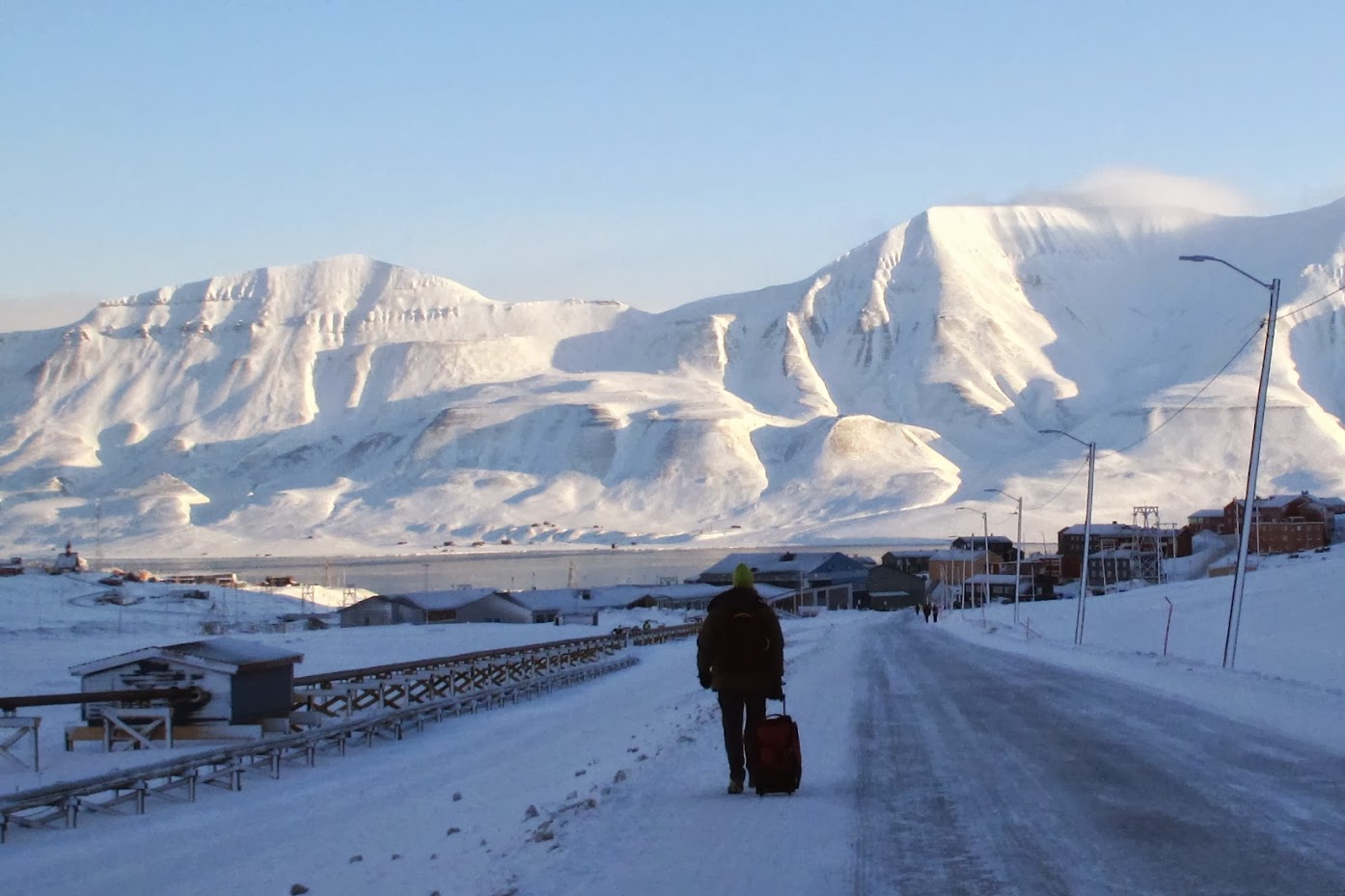 This is our last day in Svalbard. Everyone is packing slowly, but it somehow turns out everyone is ready well before planned time to leave for eclipse observation spot. Some of us still need to visit the post office to send postcards with the special total eclipse stamps that are available only on the eclipse day.

Our free sledge (Arctic version of free city bicycles) that we had so much fun in last couple of days are gone. As we race down the hill on our foot with Agnese, I remember Tommy, traveler, dog-racer and owner of “Traveling Huskies” who told us how to drive the dog sledge. The central leash of dog-team needs to be under tension at all times not to harm the dogs. And it always was, as the dogs were eager to run forwards.
Our imaginary leash this morning is under tension as well. The aim is close. The bags are packed. The eclipse watching spot selected. Go! 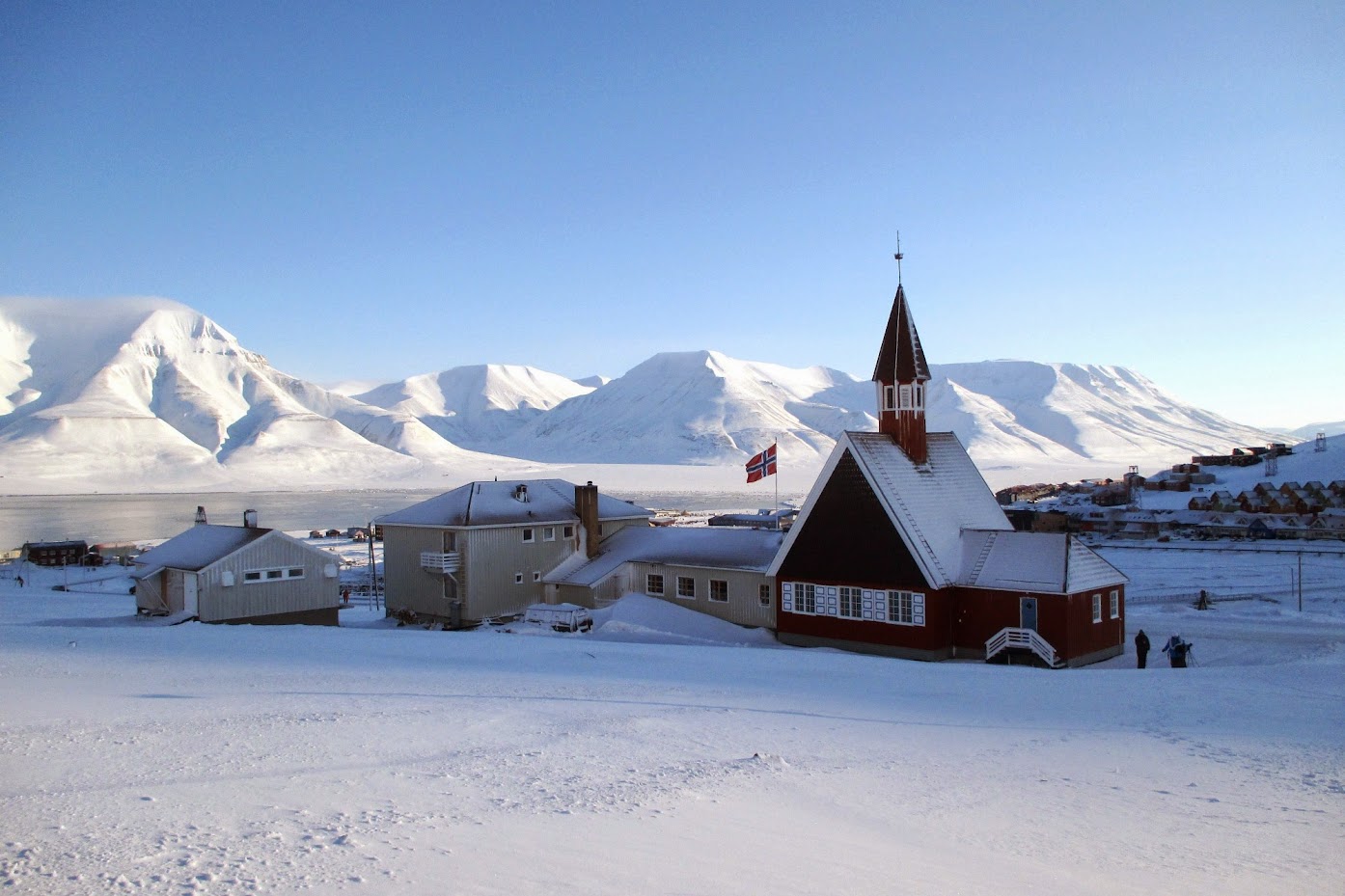 View from our eclipse place

We have selected a spot between the local church and sun-dial. Both of them, of course, the “northern-most” ones. As we have checked before, the church is very friendly and some of us use it from time to time to warm up during the eclipse hours in -18 degree cold. Norwegian flag is being raised near church. Yes, this small northern community can be proud of themselves!

It is some twenty minutes before the beginning of the eclipse and we are watching the games shadows are playing. The situation changes from day to day as each day is ~20 minutes longer at this time, however the sun is still low over the horizon. Well, the imaginary horizon, because you need to take into account the geometry of mountains. We end up following the visible area between shadows of two mountains during the eclipse.

Everything is set. Partial phase of eclipse is well underway. We are here. I am here. Everything that needed and could be done- is done. The weather is perfect. The time till Totality remains. I am standing there, observing how inevitably, in speed of Earth and Moon, my childhood dream comes true.

Totality is just as indescribable, as a new unknown spice. You just don`t have words for that particular taste and the ones you have- they are just not enough. A spice, that is available roughly only each 18 month. Provided that the shadow of Moon actually crosses some land, not just oceans. Provided that you can travel to that narrow patch where it can be tasted. Provided that the weather is good.

I thought the last sentence was pretty good ending of this blog. But on our flight from Svalbard to Oslo, I finished an introductory book on satellites and from tens of unread books on my kindle, I chose a new one. The Happiness of Pursuit by Shimon Edelman- human and machine cognition professor at Cornell University. The same university Daina Taimiņa is teaching on hyperbolic planes, part of non-Euclidian geometry, another of my interests.

As I was reading the first chapter, a quote struck me unexpectedly like a lightning. A quote from “Monday starts on Saturday” by brothers Strugatski- same authors I referenced in my Day 1 blog. What were the chances.

The circle is now complete. The Diamond ring. With a new path forking off.

Author of the diamond ring picture: Sandy kil at ru.wikipedia