14.03.2015
The day started just like the last 858 days of my life – with a run. And yet this turned out to be very different day indeed. The first full day here in Longyearbyen! The post office happens to be located 2.4 km from our living quarters – ideal for running down to it to send a postcard to my sister back home in Valmiera and then running back uphill to collect the so necessary five kilometers – minimal amount per day set for us by Alina. The weather is really nice today – sunny and without wind. This naturally means the default running outfit for me – just a T-shirt and shorts. I don’t know the temperature, but since my ears started to get cold in the way back, I estimate it to be slightly colder than, say, -5°.

First full day comes with the first breakfast offered by the guesthouse. I was a bit worried about whether there will be also something edible or just toasters with jam and chocolate, serials and other poisonous food. No worries, my dear reader – there were plenty of real food available including but not limited to two kinds of cheese and four kinds of meat, as well as some cucumbers and even pate.

9 o’clock and we are ready to go! Today we are expecting a hike outside the city over some minor mountains. It is said to be over in 5-6 hours, so a half-day trip. We are provided by the necessary equipment – snowshoes, walking poles and windproof gloves if needed – and we are to be guided by two official guides – the main guide Katja, originally from Germany, and her helper Luise. Katja also carries a rifle in case of polar bear attack, which happens quite rarely in this area, but the probability of encountering the king of Arctic is certainly not equal to zero (and, of course, also not negative, as you may remember from your math lectures). Our guides are assisted by the most inspiring member of our little team, who hiked all the way completely barefoot and also without any other clothing than that of his own fur. The dog even enjoyed laying back in snow and waiting for us, other members, now and then. 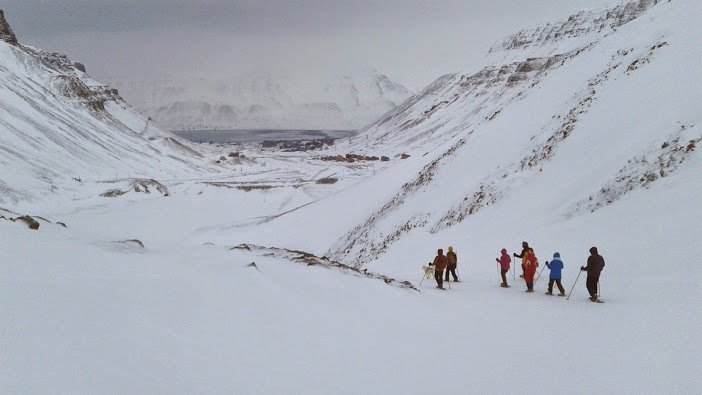 10 o’clock and off we go! We are heading the big mountains very near the guesthouse of ours. Walking in snowshoes is quite easy, although this is the first such experience for me. Snowshoes provide extra surface area for us not to sink deeply in loose snow, as well as a protection from slipping down the cliff because of their spikes. Soon enough we have reached the foot of the mountain and start to incline a bit. Let me just run a bit ahead of the story by stating that the hike was spectacular. It was just perfect and certainly one of my most memorable hikes I have ever done! Although our pace was really slow and we made breaks really often, the magnificent views around us made me think of what an amazing adventure I am in.

Katja had explained before that the weather can change quite a bit rapidly in winter, and we noticed some changes right away. The morning sun had left us alone, and wind had appeared instead. As we progressed more towards the peak of the mountain, wind gathered in force and sometimes blew really hard. I was happy to be part of it all and to feel the raw strength of nature. It was not cold, however, because of several layers of clothing, only my fingers started to get cold now and then, but it was a quite easy-to-solve problem by just swinging the arms sparingly to induce better blood flow to fingertips.

At one point it was stated that we are now on a glacier – also the first time in my life. Yeah, today is the day of many first times, and I think not just for me. I think the name of this glacier was Larsbreen, which means in Norwegian the Lars Glacier (but I may be wrong, don’t put all your money on this). Then there was a second glacier towards the end of the hike – Longyearbreen. Between the glaciers we reached the highest point of the trip – the Sarkofagen mountain ridge. The weather on the ridge was really windy and thus quite cold (particularly, if you want to take some pictures with your touchscreen, which requires removing your glove). It was also snowing a bit, so the panorama around us was quite dim, but something was seen anyway, and that was really beautiful – the mountains were (and still is) majestic and looks even a bit surreal covered in snow and ice. The peak was a bit more than 500 meters above sea level, so we had ascended by some 450 meters or so.

Then there was a tea (or coffee, or water and some cookies, or a strange syrup) break a bit lower from the ridge, where there was a bit less windy, and then the final stretch back to the civilization. Outside the civilization we met only a couple of other groups, smaller than ours, and one solo traveller, as well as we got lucky to observe some reindeer from a distance. Our furry colleague was always first to notice the presence of reindeer sniffing the air towards them and wanting to catch some, and Katja tried to convince him (although unsuccessfully) that this is not his dinner.

On the way back Agnese offered a more fun way of getting down the slopes by laying on your back and being pulled head first by two people pulling by your walking poles. Where is fun, comes a sorrow, and this was a place I left my mobile phone by letting it accidentally slip out of my pocked. I noticed it only at the end of our journey, so what to do – mountains, however much inspiration they give, also take their part back. Like everybody of us – they give and they take, and you are not always allowed to choose, what is given and what is taken. It was a clear sign for me that I must reconsider the role of stuff and things in my life – maybe I still own too much. I must, however, mention that after the discovery of the loss Katja and Alina went back by a snowmobile to this place, where I was pulled, and found my phone already covered with an icy skin, but still working. This is, however, a different story that does not go well together with my version of giving and taking, so this is not a part of today’s tale.

The journey is now ended, but the day is still on. Alina and Juris walked down to the city centre to see the church, while the rest of us rested at home. The rest of us rested – what a word play! But also other parts of this story were actually described with inaccurate words. The mountain we hiked was actually just a small hill, the big journey was actually just a small walk (we covered only 8.5 km in just over four hours), and the home we rested at was just a cozy guesthouse. But this is the life – when you are placed in a so different environment from usual, everything seems unnaturally amazing!