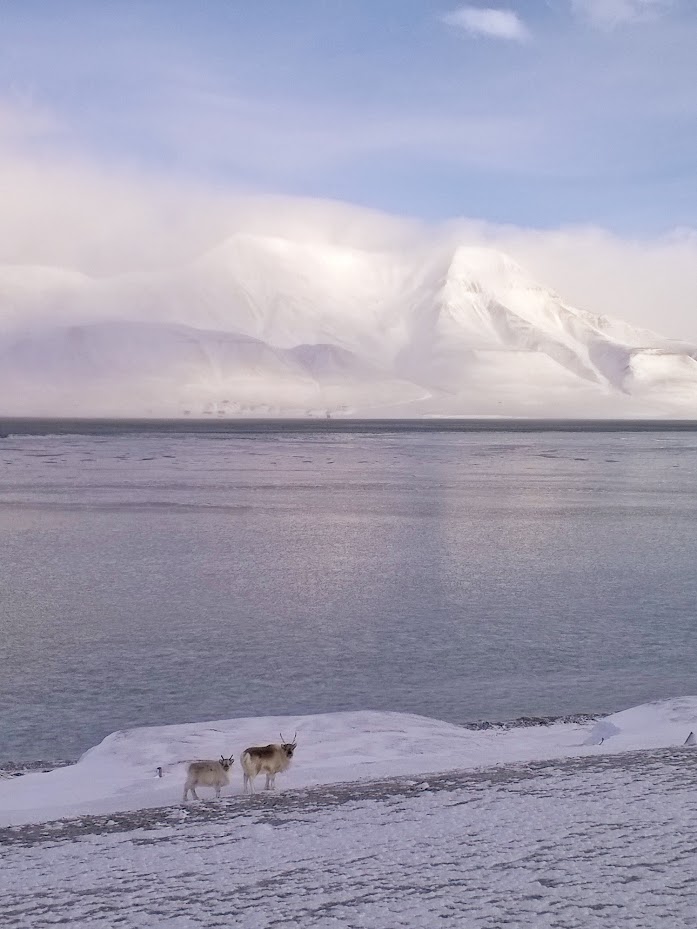 The three of us follow the road further. Only footmarks and tracks of snowmobiles are visible on the road. The old road goes along the flat top of a steep hill, and the new road goes a couple of meters above the sea level. In the middle there is the old trolly line. The weather is fine, sunny, there is no wind, only quite a frost. On our way we meet several of the Svalbard’s distinctive reindeer (Rangifer tarandus platyrhynchus)

After some time the airport is visible, and we are heading uphill. On our way a big bus passes us and it is soon followed by a minivan which stops and we are asked if we’re fine and where we are going without a guide. the woman reminds us that it is not the best idea to wander around ourselves, but also says that there haven’t been any polar bears seen in this area. We continue our journey, soon the entrance of the seed vault is visible, and Juris is already excited. Juris goes straight to the door, me and Agnese go along the road and stop at the sign “Svalbard Global Seed Vault”. 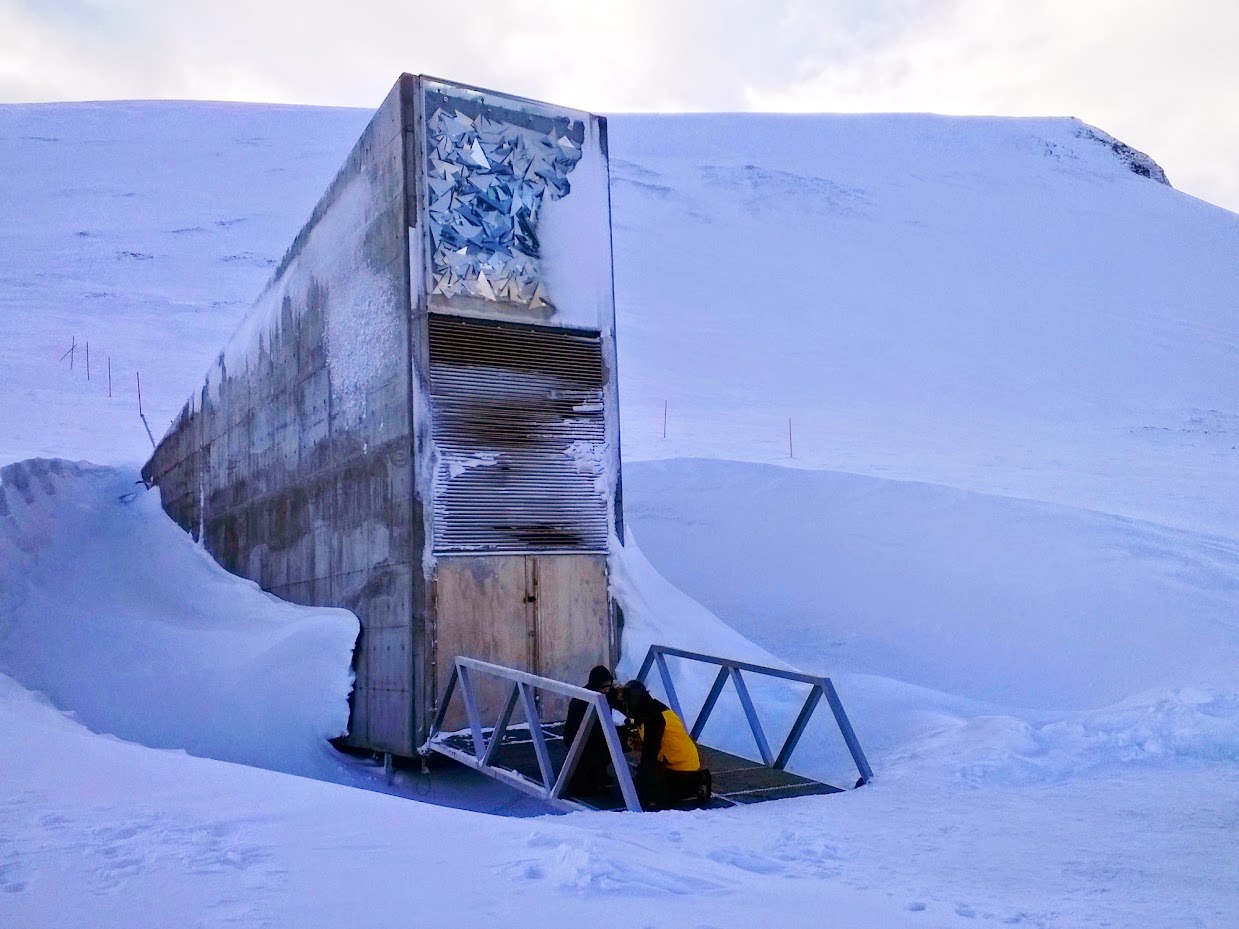 We are there now, the entrance is a big concrete building with steel door at the top of which there are many triangle-shaped tablets made out of bright metal and at the front of which there is a short metal grid bridge. We drink some tea, eat some sandwiches and head back to the town. We meet on the way the same reindeer, this time they are crossing the road. A bit further on we find another Geocache which surprised me with its originality. It was not hard to find as it was hanging in a ceramic bowl, and I marveled that it was still intact.

We get back to the trolly sorting station, and the kicksled are still here. Agnese sat down and we were sliding down the hill. I have not managed to learn to control them as well as some other guys. They are as a chair on rails which are extended backwards, on which one is standing and controlling the sledge. At the junction we switch places, but Juris meanwhile crossed the slope straight across the snow and soon was at the bottom of the hill. Me and Agnese pick up the speed. The road has a bend which was driven along perfectly by her, and behind us a car followed with a normal speed. That was such an experience!

On our way we stop by the same store to use the internet. The post cards here are cheaper than in the post office – 7NOK. In addition I eye some souvenirs and playing cards for my collection. Soon after that we are back home where we will be staying the last night. Some are already home, some others still out.

We find out from Anders that a polar bear has attacked Czech tourists. Later we find out a more precise information from Maija. In the morning the polar bear had looked inside a tent, taken one guy by its hand and dragged outside. Everyone had been surprised as the scaring device around the tent had not worked. They had shot with a revolver (as far as I understand they didn’t have a guide), but that only could injure the bear. The polar bear had run away and later people were following its tracks to kill it as an injured bear is dangerous. Since the new scaring devices are not always working, those who still have the old Norwegian army scaring devices which are no longer produced, keep them as treasure as those are said to be very reliable. Also the university is looking for better alternatives for such cases but so far they have not succeeded. Juris is preparing to go to a museum and eats lunch before us. We are preparing our food and later will go to the same (university) building to attend a lecture about the Solar eclipse. On our way we meet Alīna and Edgars, who are coming from their guesthouse. Soon we are there. Also here we need to take off our shoes at the entrance, and then inside one can walk around in socks or slippers. The building itself is big and spacious. The auditory is already crowded, some have been timely to take the seats, some are looking for a place along the sides. We were warned that it’s not allowed to sit on the side-stairs due to fire safety rules. Then we find a place at the very front on the floor and find out that the 2 empty seats are free, so we quickly occupy those. From the middle I am passed my camcorder which I had given them from the side to film the lecture. Since I am in the front now, I will film everything from the front so that the talks get recorded better.

The following topics are looked at in the lecture: The safety measures for observing the Sun, how to observe it, how to use the eclipse glasses; which camera setup to use at certain eclipse moments; The structure of the Sun and the principles of its activity. We also found out about the Sun spots, magnetic storms and how the auroras originate. As one of the lecturers said, the greatest dream would be to see the total Solar eclipse here and an around an aurora. The lecture was cool, after it there was a time for questions and answers to them. At the reception there are eclipse glasses which we can get for free.

We head home and find another kicksled, and are pushing it to home as well so that it would be easier to move the bags in the morning. Kristīne un Everita have decided to go to sauna which is located close to our home.

Meanwhile I have firmly decided to photograph stars tonight and to try to catch the Iridium satellites which will fly over shortly before 2am, one soon after the other. At the same time maybe it will be possible to take a photo of aurora. Also others are interested, but they are going to sleep and asking to be woken up if the sky will be clear.

Before 2am Agnese decided to go outside to take a look, and came back with bad news that nothing is visible above. A shame, have to leave out photographing of Svalbard’s sky, but it is likely that I’ll come here again some day. Then we go to sleep, after all the greatest event of this trip which we came here for – the total Solar eclipse -, is happening in the morning! We hope for the best weather and that no clouds will interfere with viewing this phenomenon.
Good night!